Between the sea and the land – the Kiribati Object Journeys display at the British Museum explained.

When we were approached by Kayte McSweeney from the British Museum last year at an annual Kiribati Tungaru Association celebration, she talked to us about an interesting project at the Museum looking at showcasing Kiribati artefacts, culture and heritage and how they wanted people from the Kiribati community to get involved. We were thrilled to be invited and over the past year have been exploring the Kiribati collection, selecting and labelling objects to create a new beautiful display. We thought this would be a brilliant opportunity to raise awareness about Kiribati, particularly within such renowned location and where literally the world passes through its doors. It’s been amazing as a community to help shape the narrative and be part of the process of selecting the objects to be involved in the exhibition’s curation.

The display opened at the end of July in the Wellcome Trust Gallery: Living and Dying at the and will be open for at least the next year. 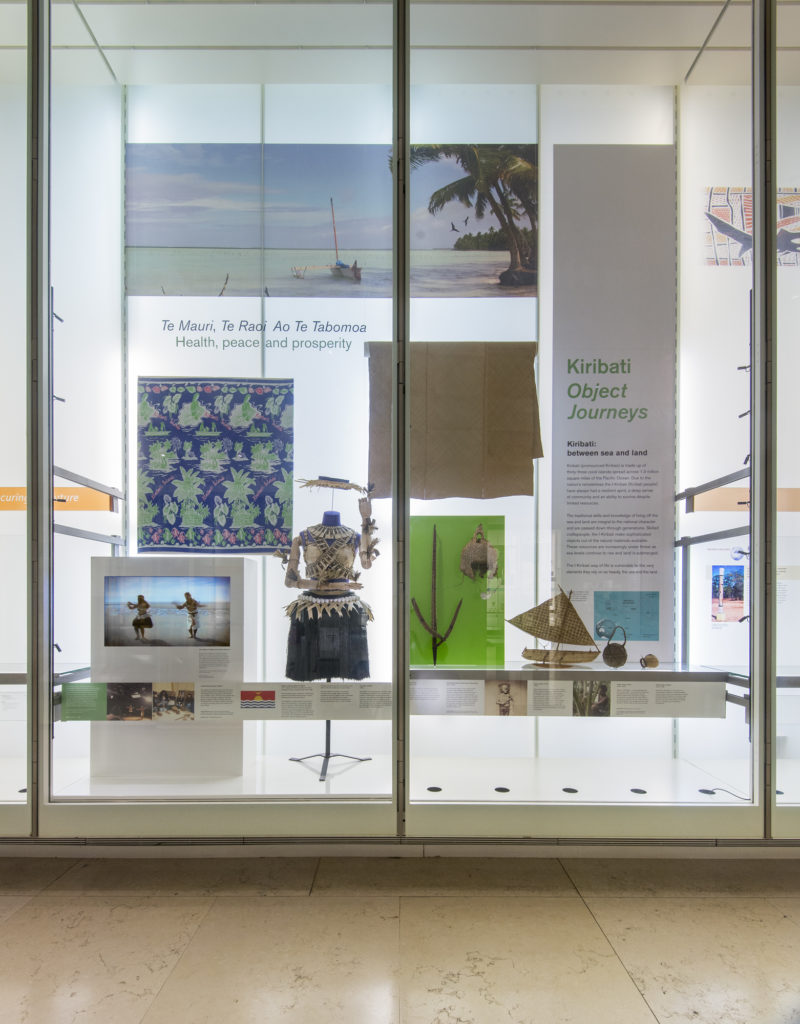 The Republic of Kiribati (pronounced Kiribas) is an island nation that straddles the equator and is situated in a very remote location in the central Pacific Ocean. Spread over a vast area spanning almost 3,000 miles it is roughly halfway between Australia and the Hawaiian Islands. A group of sixteen of these islands and atolls were once known as the Gilbert Islands and were part of the British colony the Gilbert and Ellice Islands, for a little over 100 years from the late 19th to the late 20th century. The islands are vulnerable to the tropical climate, can be extremely hot and with a harsh environment most kinds of agriculture is difficult.

Kiribati’s remote location makes its culture unique. The I-Kiribati (Kiribati people) are incredibly welcoming, full of humour and laughter, positive and joyful about life. Community is valued highly and everyone helps each other out when they can, even if resources are limited. While all I-Kiribati each island also has its own identity with its own traditions and characteristics. It’s often common for people when first introducing themselves, to proudly state their home island and their family tree as this connects people to each other. 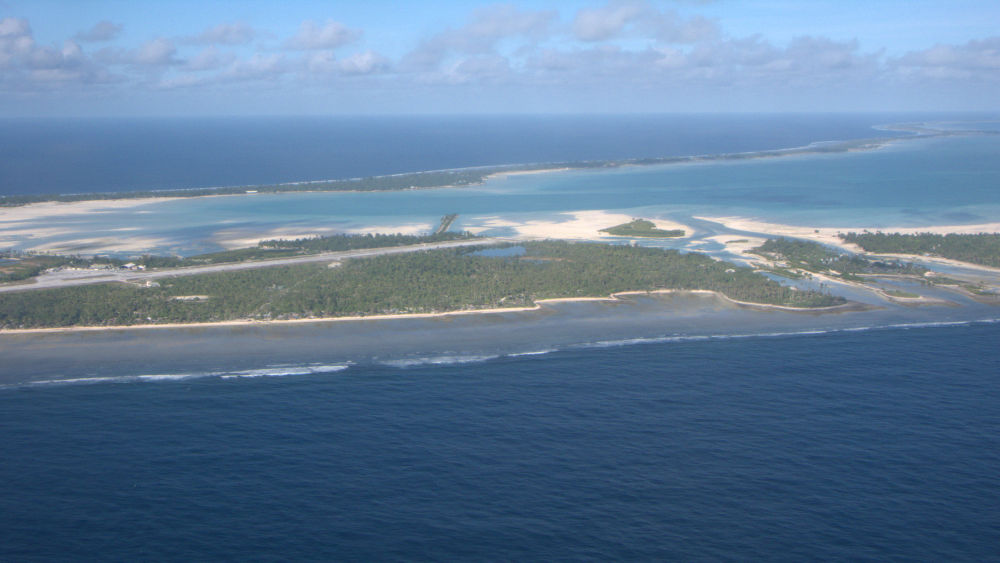 Meaning behind ‘Between Sea and Land’ theme – why this angle was chosen to shape the case story:

I-Kiribati people are not only physically reliant but often spiritually connected to both the Sea and Land. Their identity is deeply entrenched in this connection. The boundaries between the two are often not clear, the sea and the land interweave into each other. The relationship with both can be positive and negative at the same time – its not straightforward but a complex relationship. The knowledge and skills of how to live off the sea and land in this region have been and continue to be passed down across the generations. This includes great skill in making sophisticated objects out of the limited natural materials available on the islands and also the knowledge of what is and isn’t safe to eat.

The deeply entrenched connection with the Sea and the Land is also portrayed through many of the dances of Kiribati via the songs, stories, themes – seen in the movements of the dancers. Dance is a way of storytelling, a way of remembering and passing on cultural knowledge from one generation to the next. It’s the continuous practice of keeping this knowledge alive and is held in very high esteem, at home and within diaspora communities.

Resourcefulness is part of the national character of Kiribati – nothing goes to waste. This is integral to remote island living, particularly in the past, and is a source of pride for people. Resources are limited and are increasingly under threat as the tide encroaches and land is submerged. In the end which is more powerful – the sea or the land? The tensions between these is key to contemporary issues facing the Kiribati nation. The islands in Kiribati folklore were born from the ocean, and if climate patterns continue – will be taken back by the ocean.

The very nature of the islands — sea and land — make the country, its people and culture very vulnerable.

Description of some of the objects on display

Donated by Meretita Burns for the new display the pattern on this sarong-like cloth shows everyday island life. Worn by men and women, it illustrates the stripping of coconut leaves for rope making, the beating of pandanus leaves for weaving, collecting toddy (a sweet sap) high up in coconut trees, and fishing at sea. These are all distinctive motifs that demonstrate the traditional Kiribati lifestyle and the islanders’ practical skills in their environment.

Lava-lava, Te Bee on display in Kiribati: between sea and land © Trustees of the British Museum

Known locally as ‘Kamaimai’ or ‘Karewerewe’, Toddy, the cordial of the islands, is a sweet syrup and is extracted from the flower spathe (a young offshoot) from coconut trees. Depending on the period of fermentation, this versatile syrup can serve as a delicious sweet drink, soured into vinegar called ‘Te Beneka’ or most commonly fermented into the potent alcoholic drink called ‘Te Kakioki’. Toddy is usually collected by male relatives and dawn chorus whistles and calls from the men can be heard high up in the canopies as they collect the sap in coconut shell carriers every morning. When the flower spathe is at the right age, about 28 days, it is tied and bound by a long piece of string which is wound around the spathe from its base up to its top. It is then cut at the top end repeatedly with a sharp razor-like knife every 12 hours or so until a sap starts to drip down and can be collected with a coconut shell or a bottle. A coconut shell or a bottle is designed to enable efficient collection of the sap 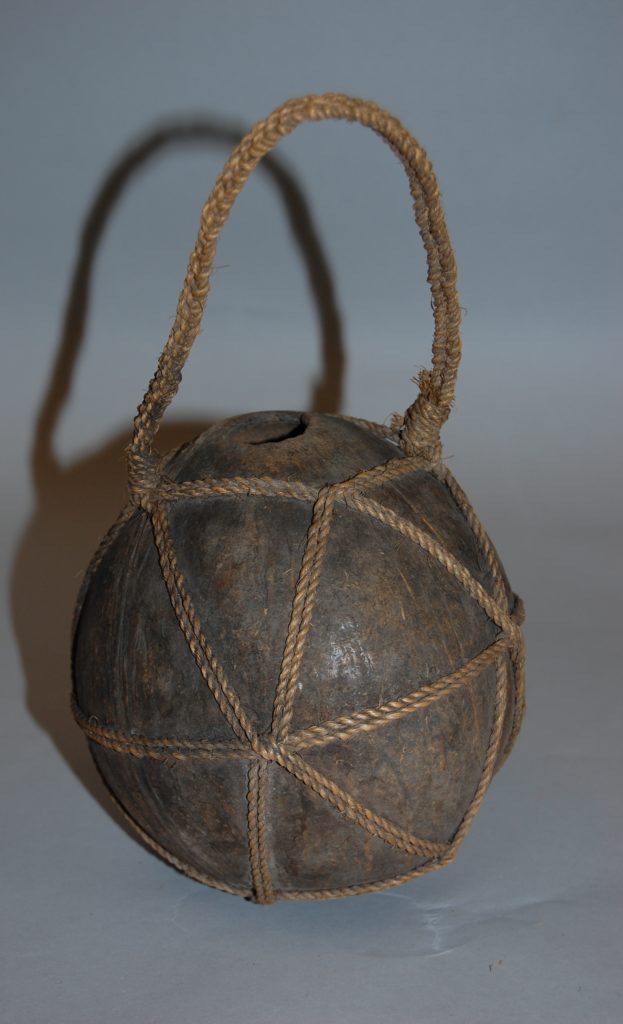 Toddy carrier, Te Ibu on display in Kiribati: between sea and land © Trustees of the British Museum

Harnessing the power of two revered marine creatures, these weapons showcase I-Kiribati ingenuity, resourcefulness and their connection to the sea. The sword utilises razor sharp sharks teeth along its edges and the spiky puffer fish skin is skilfully shaped into a warrior’s helmet. Combined they created a fierce emblem of warfare and strength. Today the sword is a decorative piece sold to tourists and to I-Kiribati living abroad as a reminder of their roots. 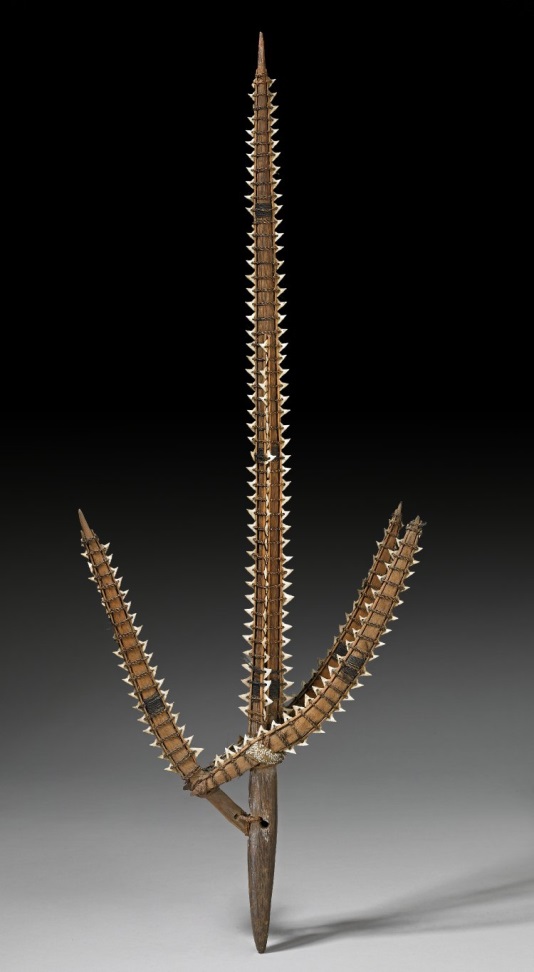 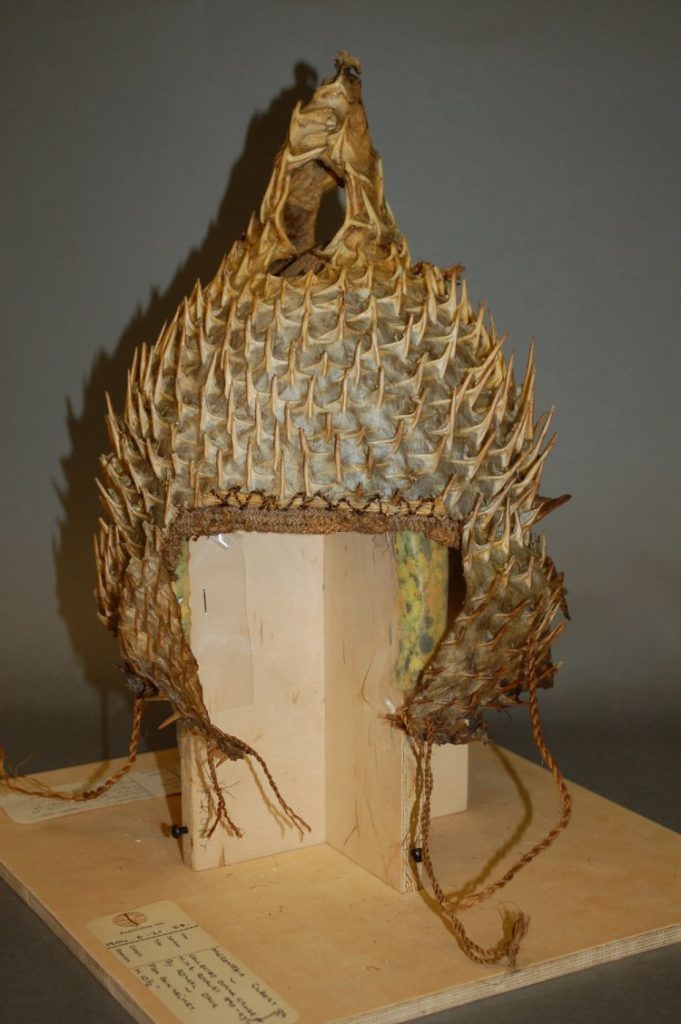 Helmet and sword, Te Reere and Te Barantauti on display in Kiribati: between sea and land  © Trustees of the British Museum

Their remote location in the heart of the central Pacific makes travel between neighbouring atolls (ring-shaped coral islands) a vital necessity for I-Kiribati. Canoes like this were traditionally constructed from local wood, pandanus leaf and coconut tree materials, illustrating the resourcefulness of the Islanders when supplies were limited. The woven pattern of the sail is uniquely I-Kiribati and made in a typical style. Today motor-powered boats are commonly used, but traditional canoe-making skills are still taught and practised.

From birth to death, the pandanus leaf mat is ever-present in the life of the I-Kiribati. Found in households throughout the Islands they are used as floor mats, sleeping mats, and worn as part of the male dance costume. Hand-plaited in a lengthy and delicate process, the texture and pattern of each mat depends on its purpose. 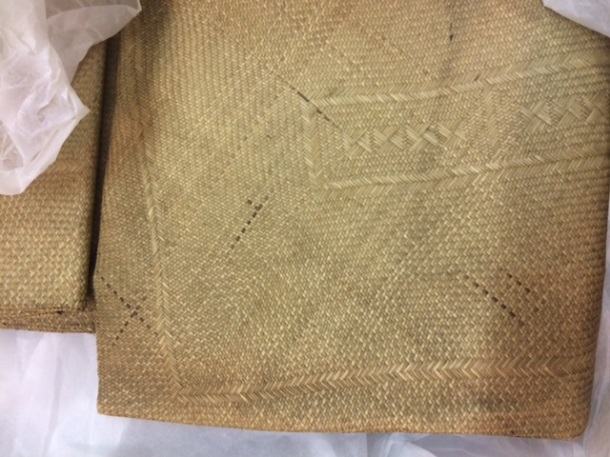 Mat,Te Kie on display in Kiribati: between sea and land © Trustees of the British Museum

The golden sun (Otintaai) rises over the sea on the post-independence Kiribati flag used since 1979. Before their independence the islands were a British colony. The flag shows three white lines in a blue sea which represent the three groups of islands: Gilbert, Line and Phoenix. The frigate bird is a national symbol and is said to show the strength, power and resilience of the I-Kiribati. 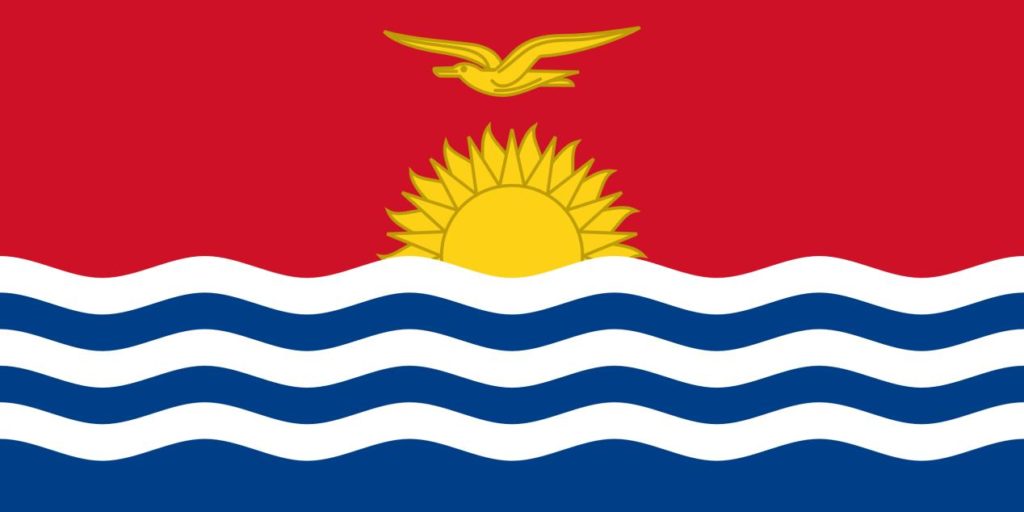 The hand-made dance costume is a well-known symbol of the islands and dancing is a way of sharing stories across generations. The head piece, usually made of fresh coconut leaves, draws attention to the dancer’s sharp head movements which represent the frigate bird as it glides over sea and land. Pandanus leaf flower ornaments decorate the dancer’s arms and fingers and highlight their rigid actions. Contrasting shell and coconut bead belts worn over the black skirt emphasise the hip movements and make a rhythmic clinking sound. I-Kiribati people living in the UK use raffia for the skirt in place of coconut leaves.

The hips imitate the waves of the sea and contrast with the stable upper body which represents the land. Together these movements convey the close relationship but tension between the two. The highly trained dancers bring great pride and honour to their families.

Dancing is still strong within our diaspora Kiribati communities worldwide. Here in the UK, it still is flourishing within our community, throughout the generations. For the older member’s dance is an opportunity to pass on tradition and for the younger generation a way to connect to a culture and place, that for some they’ve visited. 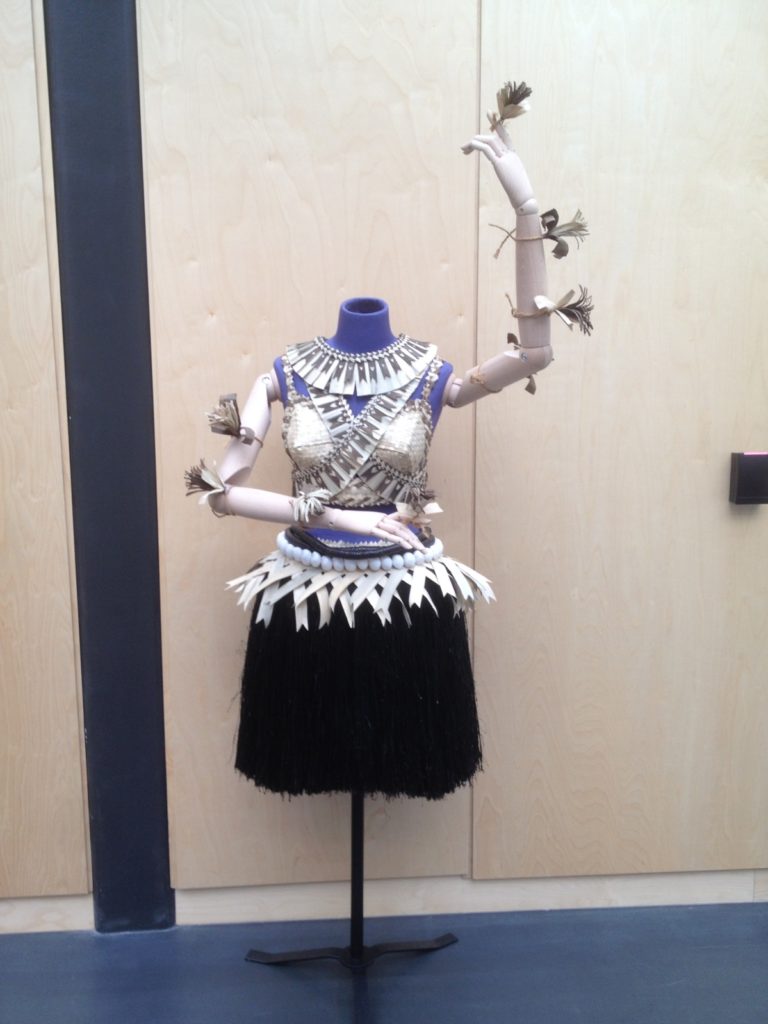 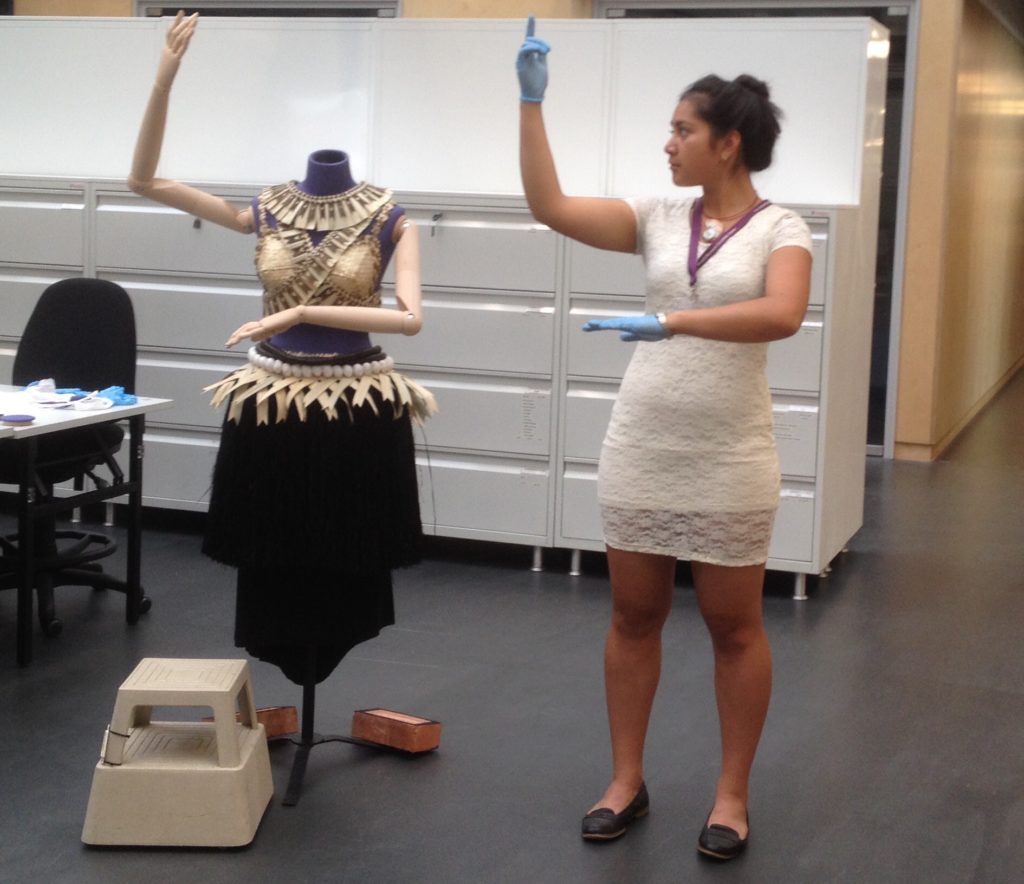 Kiribati dance costume being prepared for display in Kiribati: between sea and land © Trustees of the British Museum

Growing in abundance on the islands the coconut tree is integral to the Kiribati lifestyle. Coconuts have many uses, including as a source of food, drink and medicine. This coconut shell has been hollowed out to make a fishing float. Placed in the sea to mark locations of fishing nets, it is a simple yet functional piece of equipment. 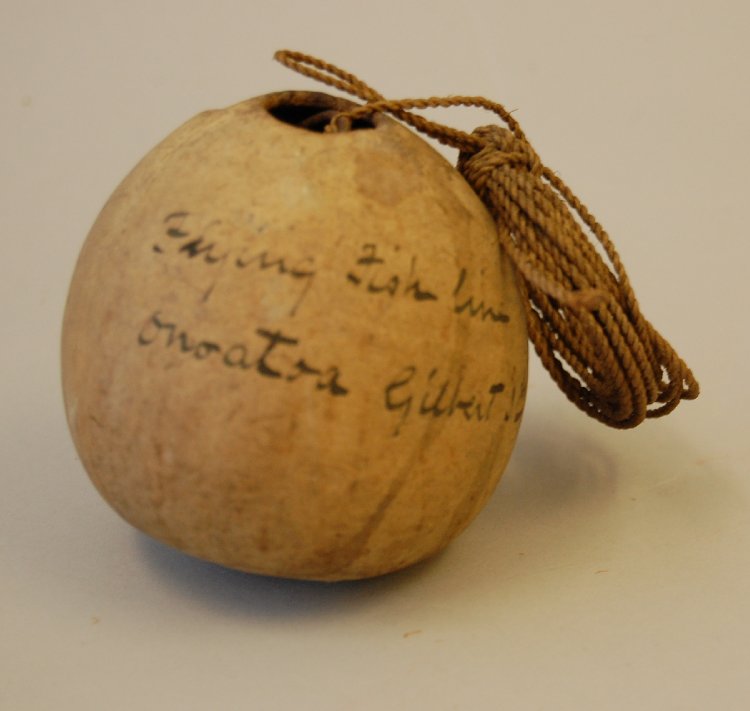 Fishing float, Te Betia on display in Kiribati: between sea and land © Trustees of the British Museum

We hope this has given you an insight into our country, our national’s material heritage and Kiribati culture. This past year has been a unique and rewarding experience working with the Museum staff and curators. As we are so far from the islands of Kiribati we don’t get to typically engage with traditional objects so it has been an opportunity to really dive into our heritage.

Kiribati is at risk due to its remote location and geography, being such low lying atolls and islands surrounded by the rising Pacific Ocean. The country, people and its culture is on the frontline of climate change and we feel that it is particularly important to be raising awareness about our culture and people at this time. The islands were born from the ocean and will be taken back by the ocean – their very nature makes them vulnerable

As mentioned earlier the spirit of the Kiribati people is that they are naturally so joyful, welcoming and happy. They take life in their stride and have a positive outlook on life.  We feel fortunate that though we are coming up against worrying times across the world people are starting to notice and have taken an interest in Kiribati, with not only the British museum exhibiting a case on our country but this year an exhibit on our islands has also opened in Cambridge museum and the Horniman Museum based in London, and even museums in New Zealand are also showcasing our culture. For Kiribati islanders based in the UK this gives us reassurance that we are being supported and that our culture and heritage is being recognised and shared to visitors across the world.