The Powell-Cotton Museum at Quex Park in East Kent was established in 1896 by Percy Horace Gordon Powell-Cotton (1866-1940) and added to by subsequent generations of the Powell-Cotton family to house the natural history and cultural artefacts they collected during their expeditions to Africa and Asia in the late 19th and early 20th centuries.

For the Somali Object Journeys group it was the unrivalled collection of historical Somali objects and the bountiful archive material that drew them to visit the Museum on a sunny day in April 2016. A long-term partner of the British Museum, the Powell-Cotton Museum enthusiastically welcomed the opportunity for the Object Journeys group to explore their collection and discuss ideas and research with curators and staff.

During a 1934-1935 expedition to the Somali region Diana Powell-Cotton (1908-86) not only collected hundreds of wonderful objects but meticulously photographed and documented her trip and the collections process. These photographs, journals and records revealed much to the Object Journeys group about the objects the Powell-Cotton’s collected and gave context to their research by providing information on the places the objects were collected or bought from and the people the Powell-Cottons encountered. The photographs in particular fascinated the group. Incredibly rare and special they also provided an insight into the time period the group were researching and were for many the first time they had seen such a volume of images of the Somali region at this time. 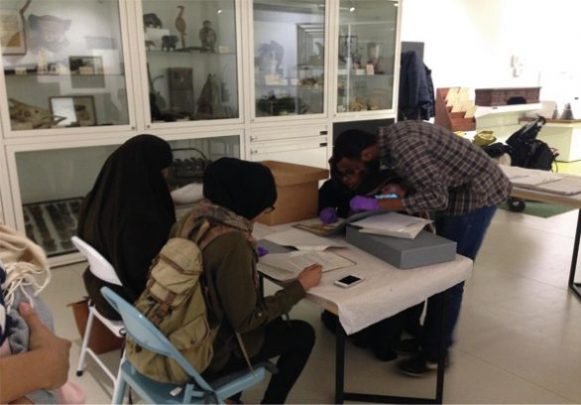 A sample of the wonderful photographs from the Powell-Cotton Somali collection can be seen above and the project was generously given permission to showcase them in their display in the Wellcome Gallery at The British Museum.