One of the objects currently on display in the Somali Object Journeys exhibit in the British Museum’s Wellcome Gallery, is the one thousand Somali shilling note from 1989. On the front of the notes, you will notice two women basket weaving. Many still ask who these women were and why they are important.

The two women pictured on the note above are Hawo Nur Hirabe and Fatima Hersi. They were ordinary Somali women who made a living from basket weaving in Mogadishu. For many years Hawo worked as a basket weaver in the Abdulaziz district of Mogadishu, selling on the weaving products she made to tourists and visitors.

In Somalia, it is common for older women involved in the community to be referred to as hoyoo (mother) as it is a sign of respect. The significance of hoyoo Hawo however, lies in the simple yet iconic process of creatively producing local items such as baskets. 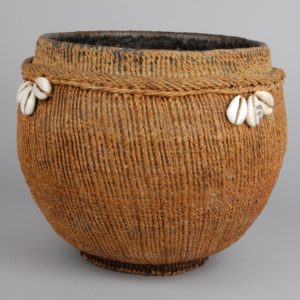 Women in the southern regions of Somalia have for centuries used different fabric and materials to weave and produce some of the most beautiful baskets, fans and windbreak covers for their houses. In the Object Journey’s display case, examples of these types of baskets are also on display; these are the types of baskets that would have been woven by women like hoyoo Hawo. The basket weaving practice is a very important aspect of womanhood in Somalia. Each region has its own speciality and it is regarded as an artistic form of expression. See some more examples of Somali basketry on the Museum’s Collection Online.

Aurala Weris Warsame, a blogger and former Mogadishu resident writes about her memories of Hawo;

‘I have vivid memories of these ladies. How they, sitting in the burning sun for hours, carefully interlaced green, purple, indigo blue and earthen colours into intricate patterns to form such incredible works of arts. My paternal grandmothers’ hobby was weaving her baskets (danbiil) as she sat near the burjiko sipping tea, cooking her meals and conversing with her friends. It was an amazing way of life that seems to be lost somehow but still omnipresent in the collective memories of so many of us who were blessed to have experienced their childhood in Somalia. Basket weaving was more than a subsistence means of survival.’

Importance of the women’s presence on the banknote: 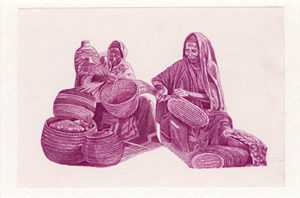 There aren’t many women displayed on international currencies, especially normal women making a simple living from basket weaving, so how did hoyoo Hawo appear on the shilling? Between 1969 – 1991 the Marxist regime of General Siad Barre, heavily influenced by the Soviet Union, was constantly trying to promote Somali self-sufficiency and production. There were many government programs initiated by this government such as the nationwide self-help and volunteering schemes, which tried to reduce the country’s dependency on foreign imports. Well known in the markets of Mogadishu, Hoyoo Hawo was the perfect choice for the regime to promote their ideology and hence she became the iconic face of the one-thousand-shilling note.

Since the overthrow of the Barre regime and and the subsequent collapse of the Somali government in 1991, high inflation devalued the Somali shilling greatly. The only remaining note from this time is this one-thousand-shilling note – now equivalent to about $1.80. The preferred currency in Somalia is now the US Dollar as it is impossible for consumers to carry wheel barrows of Shillings. Despite years of conflict, this note with Hoyoo Hawo’s face still circulates in the markets of Mogadishu.

On the 13th of April 2015, Hawo Nur Hirabe passed away aged 84, she is survived by her daughters and two sons. You can read a report here.

Importance of women in Somali society:

As in many parts of Africa women play a vital economic role in the markets, they are the brokers and facilitators of trade. The National Union of Somali Women was established in 1971 with aims of organising and empowering all Somali women (Patman, 2009).

Somali women play such an important and essential role in Somali society. In the west the term ‘homemaker’ refers to a woman that manages the home but in Somali society, women make the home not just metaphorically but also physically. Somali women for centuries have constructed homes for their families by using indigenous methods and materials. The term Aqal means ‘house’ in Somali, and is also the name for a form of accommodation used by nomadic groups who move from place to place with their herds of camel up to this day. The skeleton structure of a Somali Aqal, is usually constructed from the strong branches of a Murcanyo tree (A.W.Warsame). The gaps were traditionally filled using hay and straw however today other materials also used.

As we look back at the legacy of Hoyoo Hawa in the Object Journeys display case, we should also remember and appreciate the important contributions of Somali women in preserving Somali culture.